For the first stage of this project we read one book in each class. In math we read Flatland and in humanities we read Slaughterhouse five. Each book had themes and questions which explored what we were focusing on in our project. Both books explored ideas of the fourth dimension and how time works. Our main project question was “how do we know we what we know?” Flatland was about a word that existed in the second dimension. The people were shapes and their social statuses were decided by how many sides they had. They knew of the dimensions below them but refused to accept the idea of a dimension above them. However, one square experiences the third dimension. As events occur the square tries to figure out time and the idea of a fourth dimension. Slaughterhouse Five was about a war veteran who became “unstuck” in time. This means he unconsciously jumps from point to point in his life without warning. He meets aliens who explain to him that he is experiencing the fourth dimension. In both book the fourth dimension is mentioned however one is described as time and one is described as space. 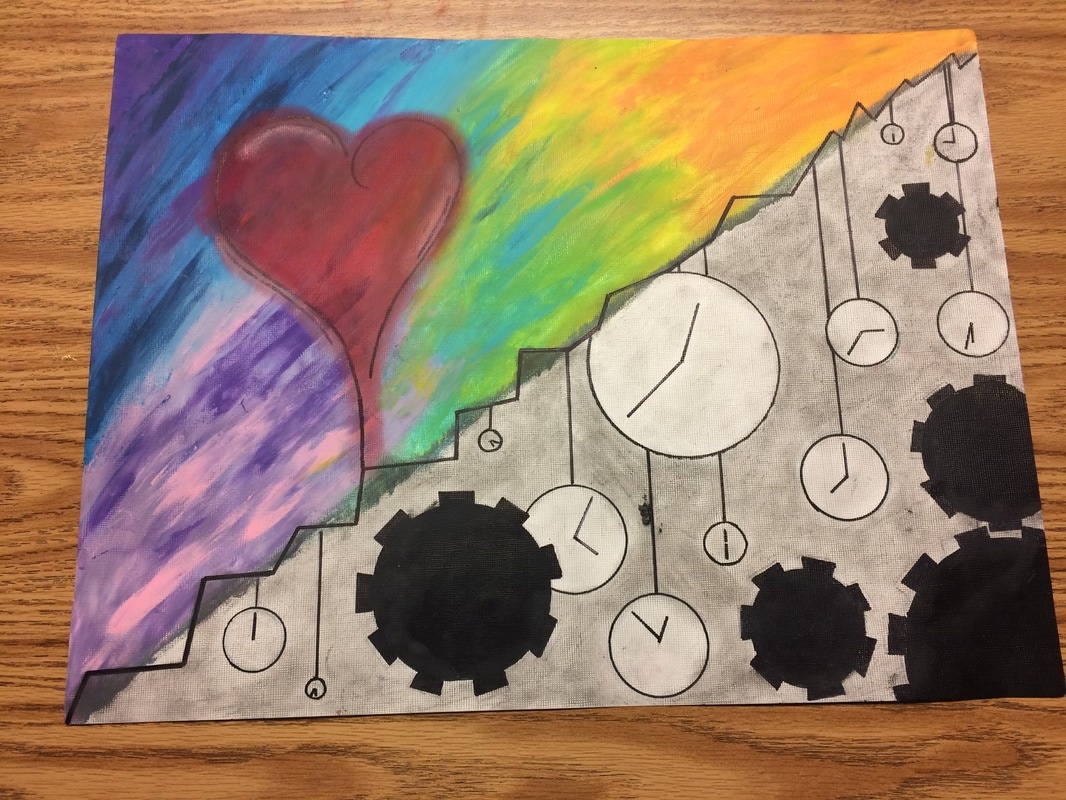 The Drift Between Emotion and Logic

For this project we decided to make a art piece based on the theme emotion vs. logic. The piece is split in half diagonally to define a separation. One side is decorated with many different colors including, red, orange, yellow, green, blue, pink, purple, and turquoise. To start off, many people associate colors and emotion with one another. For example, green is considered the color of envy and yellow is the color of happiness. Each emotion can be represented by a color. In our art piece red is passion, orange is suffering, yellow is anger, green is sadness, blue is surprise, pink is calm, purple is happiness, and turquoise is fear. This may seem mixed up from the norm but emotions are just that. There is no clear definitive in emotion. The final emotion featured through color is confusion which is represented by the blending of all the colors. Confusion is a prominent emotion featured in Slaughterhouse 5, the book we read in humanities. Slaughterhouse 5 is a book about a man named Billy Pilgrim who becomes “unstuck” in time, which means he is able to travel to random moments in his life. Often times the characters are confused about their present situation or the outcomes of certain things. Two other prominent emotions which are represented in our piece by the red heart were pain and love.
The other side of the piece is logic. We represented logic through monochromatic gears and clocks. There is no color because usually logic is black and white but it can also be confusing. That is way the clocks all point to different times. The clocks simply represent time and it’s existence. The gears represent a deeper cognitive thinking that goes along with logic. Every  shape was made with either a compass or a ruler in order give off a ‘factory-made’ impression. This side connects mostly to the book we read in math, Flatland.